Discoveries at the  table

– Today, at school, we learnt about the five senses. – Sophie said at the table as everyone waited for Mum to sit down too. It had been a long day, with so much to do, but now they were finally all together.
– And what did you find out? – Dad asked.
– That we use our eyes so much.
– But it’s not true! I smell a little perfume now... – James observed sniffing the air like a bloodhound and laughing.
– Then close your eyes and guess what’s for dinner! – Sophie challenged him.
– Great idea, I’ll play, too. – Dad said, closing his eyes too and groping for the water glass.
– Come on, come on, let’s play! – Sophie exclaimed – Mum and I will invent the tests and you will have to pass them, but without peeking, not even a second. Is that OK, Mum?
– That sounds like a great idea, Sophie. Let’s get started right away…just use your sense of smell to tell me what’s in the oven.
– Let’s see, or rather let’s smell a little… I smell rosemary and sage! – Dad replied promptly. 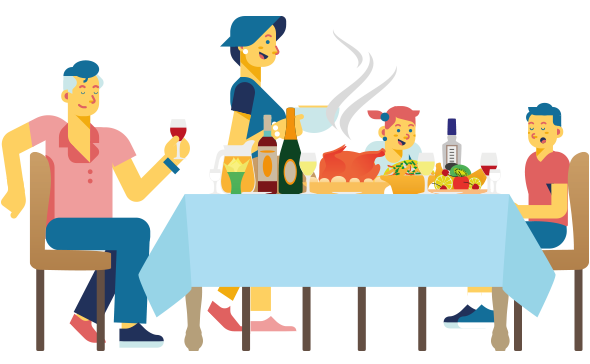 – Right, and then what?
– Roasted potatoes! – James exclaimed. – My favourite… YUM.
– Exactly, but this time there is a special ingredient that I like so much: I followed my grandmother’s recipe, the one she used to
make for us when dad and I were engaged.
– I know, I know, the onions! – their father exclaimed confidently.– Wrong! Besides, since when have I liked onions?!? –
Mum asked, annoyed.
– Come on James, you try it: this time you can use the taste. – Sophie said, feeding her brother a spoon full of… who knows?
– I don’t understand… – he said. – It’s soft but also a bit hard, it’s salty but also a bit sweet… I need a clue!
– She’s the courgette’s cousin – Mum said.
– It’s orange and says whooooo-ooo – added Sophie laughing, whilst Mr Fridge, who felt a bit excluded by all those tastings, immediately took the opportunity to play a ghostly background music, very much in the same theme… James got scared and opened his eyes: – But it’s pumpkin! – He exclaimed as he saw the pan of baked potatoes and squash. – I never would have guessed.
– I told you we use our eyes so much, instead we have to use all our senses to enjoy every moment! – Sophie observed.
– Now it’s time for your hearing… – mum said, after she had finally sat down.
First a little tap was heard and then many crunches.
– Fries! No… I know: rice cakes… – James and Dad started trying to get their minds around all the crunchy, crunchy foods.
– Listen better! – Sophie exclaimed
– And then think about the menu… – mum added. – Do you think I would have made potatoes, pumpkin and rice cakes? It would just be a waste of food and a meal without nutrients… – Did you say protein? – Dad observed, taking the hint at once. – Did you do the ribs? – he asked hopefully…
– But dad, ribs don’t crunch, they don’t have a shell… – Sophie observed without realising that she was revealing everything.
And, indeed, James guessed immediately – The eggs! It’s the eggshell that crunches.
– Good, just like that. – Mum smiled – Now let’s eat, otherwise it will get cold.
– But mum, we haven’t done touch! – Sophie intervened.
– You’re right, let’s do this: now let’s eat and after dinner there will be the big final test.
The dinner was a lot of fun: Dad told about the time he had tasted the hottest chilli in the world and he had turned all red and even if it was snowing outside, he was so hot that he put on his swimming and ran outside.
Mum remembered the scents of spices on her honeymoon and the smells of the fish market when she accompanied her grandfather to the harbour early in the morning as a child.
As she listened Sophie thought about what to come up with for the final test.
What food could she get people to touch? Perhaps, the rough crust of the bread that had been left over and would be taken to the ducks in the park tomorrow? Or the smooth, polished skin of the apple?
As she thought about it Sophie saw that Mr Fridge was calling her. She approached it slowly without being noticed.
– How about ice cream? They certainly don’t expect it! – The fridge suggested, amused and happy to be able to contribute to that special evening.
– You’re a genius! – Sophie whispered greedily, slowly opening the freezer.
– Everybody close your eyes and give me your hands! I found the last piece of evidence.
It’s going to be a surprise..
Mum, Dad and James held out their hands to Sophie without looking and she quickly put an ice cream in each palm.
– How cold! – Everyone exclaimed in chorus, amazed and curious – Then what is it? – Sophie asked.
– Ice cream! – James guessed immediately and added:
– Shall we do it again tomorrow night?
– Yes, of course, it’s nice to be in the kitchen all together and I already have another test in mind … – Sophie said winking at Mr Fridge: She had seen some ice cubes in the freezer! 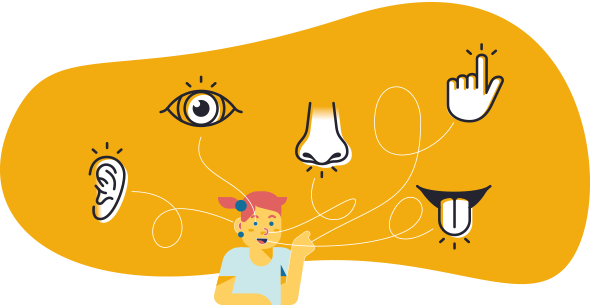